I have been an active Arctic social scientist, working mostly in Greenland and Northern Norway, and have with great joy been engaged in research on the societal perspectives of marine mammal management, a critical look at adaptation and vulnerability to changing climatic and societal conditions and adaptive capacity, and transformation to a low emission society. All from the perspective of local and Indigenous communities, but in relation to national and international processes and within an interdisciplinary frame. Co-production of knowledge has always been at the heart of my work, long before it was labelled as such. I continue the quest of finding ways to ensure that the voices of those who live in the Arctic are heard, and to include different knowledge traditions and experiences in both the design and operationalization of projects.

I am a Professor at Nordland Research Institute and Nord University and I spend my exciting days at work with research projects funded by the European Union, Research Council of Norway, local and regional funding sources and occasionally the Arctic Council. I have always carried the torch for Arctic social sciences reflected in extracurricular contributions such as International Joint Committee Member of the International Polar 2007-2008, and as Lead Author of the Fifth Assessment Report of the Intergovernmental Panel on Climate Change, which gave me an opportunity to further develop a focus on Arctic peoples and social sciences. In addition, as the first female President of the Norwegian Scientific Academy for Polar Research, a male and natural science bastion, I have expanded the social science membership. I delight in my role as a mentor and supervisor for PhD and Master students as well as young Arctic scholars. I will bring my long- term expertise from my Arctic scientific work, my travels in the region and as an observer of Arctic policy processes to IASSA and will to the fullest make use of my network in the Arctic and beyond.

ARCTICenter and Department of Geography, University of Northern Iowa  (USA) 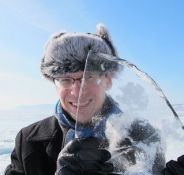 My name is Andrey Petrov and I am a social scientist with a 'circumpolar' career; I was born, raised and educated in Russia, recieved my PhD in Canada (Toronto) and work as Professor of Geography and Director of the Arctic, Remote and Cold Territories Interdiciplinary Center (ARCTICenter) at the University of Northern Iowa, USA. I have been Chair and Vice-Chair and U.S. Representative on the IASC Social & Human Sciences Working Group and Past-Chair of the Polar Geography Speciality Group of the Association of American Geographers. Now I serve as the U.S. Alternate delegate to IASC.

My research primarily focuses on economic issues in northern communities and policies of regional development in the Arctic. A also study human-environment relationships and Arctic socio-ecological systems. I lead a number of circumpolar research initiatives, most importantly the NSF research coordination networks in Arctic sustainability (Arctic-FROST and Artic-COAST). I have also been participant of the Arctic Social Indicators, Arctic Human Development Report, ReSDA and other major international projects.

I was privileged to be first elected to the IASSA Council in 2011 and since have directed my efforts to supporting representative and transparent gevernance process in this thriving organization.

I am a cultural anthropologist. I am from the Tyva Republic, Siberia. I received my M.A. degree in anthropology from Boise State University (USA) in 2009. I received a Ph.D. degree in anthropology from the University of Alaska Fairbanks in 2018. Currently, I am a postdoctoral researcher at the Division of History of Science, Technology and Environment of KTH Royal Institute of Technology in Stockholm. My previous research focused on food politics of Antarctic krill in the USSR. My current project is about polar bear protection in the USSR. I also serve as a Council member in APECS.

I studied various nomadic groups in the Tyva Republic. My Ph.D. research was focused on human-animal relations among Tozhu reindeer herder-hunters in the northern part of the republic. My master’s research project was focused on property relations among the nomadic groups, cattle and horse breeders. My research interests include multispecies ethnography, human-animal relations, reindeer herding, hunting, the Tyva Republic, Indigenous peoples of Siberia, and food politics of Antarctic krill.

As an IASSA Council member, I would like to promote indigenous involvement in IASSA, particularly to be more engaged with indigenous scholars, traditional knowledge holders, and indigenous organizations.

I am an Itelmen scholar from Kamchatka, Russia and member of the Council of Itelmens of Kamchatka “Tkhsanom”. I received my PhD at the University of Arizona in the American Indian Studies program minoring in Linguistics where my research was focused on language revitalization possibilities in the Russian context focusing on my native Itelmen language. I received my MA at the University of Alaska, Fairbanks at the Department of Anthropology with the research on the concept of sacred places in Kamchatka. I was a Postdoctoral scholar at the ARCTICenter, Department of Geography, University of Northern Iowa and now serve as Assisatnt Professor of Anthropology at the University of Victoria, Canada where my research interests are concentrating around Indigenous knowledge systems, Indigenous visions on sustainability and well-being. These include Indigenous knowledge and biocultural diversity, cultural landscapes, language revitalization, and knowledge coproduction. As an IASSA council member I want to bring Indigenous voices into the discussions of social sciences in the Arctic, develop methodologies for meaningful coproduction of knowledge and advance the appreciation of Indigenous knowledge for the future of the Arctic.  I believe that my extensive experience of working in and with my community in Kamchatka and beyond will help guide the work of IASSA towards reducing existing knowledge gaps in our understanding of the Arctic of the 21 century.

My name is Dr. Marina Nenasheva. I was born in Arkhangelsk region on the island Yagry, which is located on the coast of the White Sea. I have been graduated from the Pomor State University in Arkhangelsk. In 2009 I received PhD degree in Philosophy and now I am working as an Associate Professor at the Department of Philosophy and Sociology and as an expert at the Institute of the Arctic Strategic research at the Northern Arctic Federal University (NArFU) in Russia. My scientific research interests include ontological and epistemological foundations of sustainability, methodology of social impact assessment of planned economic activity in the Arctic, theory and practice of social adaptation to the climate change as well as anthropological perspectives of tourist and shipping activity in the Russian North. Annually I do field works in, and fact-finding trips to the regions of the European part of the Russian Arctic. In cooperation with scientists from Norway, Finland and Russia I am participating in several international and national scientific projects aimed at sustainable development of the Arctic. I decided to apply for IASSA Council because I think I can contribute to promotion communication and international cooperation among social scientists.

Embla has experience in research, project management, and international and multi-stakeholder collaboration on policy relevant issues in the Arctic. Educational background is interdisciplinary, and includes socio-economic development, anthropology, cultural geography, international relations, international law, and Indigenous studies. Embla holds a MSc in law, anthropology and society from the London School of Economics with undergraduate studies on socioeconomic development at the University of Akureyri and interdisciplinary studies at the University of Northern British Columbia in Canada. Additionally, Embla has completed Diploma level courses in Polar Law at the University of Akureyri.

The International Arctic Social Science Association is a vital component of Arctic sustainable development and an important leader in interdisciplinary research and standard setting in Arctic research, including in ethical community and participatory research. It would be an honour to contribute to the work of IASSA and serve as member of the Council.

I am a social scientist working at the Arctic Centre, an interdisciplinary research centre at the University of Groningen (Netherlands). I am currently working for the EU-PolarNet project, which shapes the polar research agenda for the EU. In EU-PolarNet 1, I was responsible for stakeholder mapping and inclusion of social sciences and humanities in the European Polar Research Programme. In EU-PolarNet 2 I am responsible as a stakeholder guardian to safeguard stakeholder and rightsholders engagement throughout all aspect of the project. In EU-PolarNet 2 we develop strong linkages and identify areas of common interest between the EU and other countries and organisations, including IASSA. My other activities include a lobbying process towards major funding bodies (e.g, EU Commission, national science funds) to enable funding Indigenous participation in transdisciplinary research, and their participation in the IASC’s Social & Human Working Group.

I am an anthropologist and the Social Science Program Director at Kawerak, Inc.  Kawerak is the Alaska Native non-profit consortium for the 20 tribes of the Bering Strait region. I have been living and working in Alaska for over 20 years, and I received my PhD from UAF based on collaborations with the community of Elim.  My current work focuses on promoting co-production of knowledge approaches in research activities and policy-making, including the development of tribally-based protocols and guidelines. I have served as an advisor to many large interdisciplinary projects, including the State of Alaska’s Salmon and People (SASAP), the Alaska Native Hub for Research on Resilience (ANCHRR), ICC’s Food Security Framework project, and others. My research interests include human-animal-environment relationships, cli-migration and ecological grief, Traditional Knowledge documentation and application, spirituality and well-being, and Indigenous food security. I am an ARCUS board member and have a strong interest in the efforts of both ARCUS and IASSA to facilitate boundary-crossing (in all senses) research, coordination, and cooperation. As an IASSA Council member, I would work to foster deeper connections between the work of our members and that of policy-makers, and to promote meaningful and equitable collaborations with northern Indigenous communities.

My name is Gary Wilson, and I am a Professor in the Political Science Department and the Coordinator of the Northern Studies Program at the University of Northern British Columbia in Prince George, Canada. I have been a member of the IASSA Council since 2017.  During my term in office I have served as a member of the Organizing Committee for ICASS X and the Theme Leader for the Governance section.  I also led the IASSA Bylaw Revisions Sub-Committee and served as the IASSA representative on the triennial Financial Review Committee.  I have strong links to the Arctic and Northern Studies communities through my involvement in the Association of Canadian Universities for Northern Studies and the University of the Arctic.  In 2014, I was the Co-Convenor of ICASS VIII in Prince George.  It has been a great pleasure and a privilege to serve with my colleagues on the IASSA Council during some very unusual and challenging times. If reelected, I would bring experience, knowledge and a sense of continuity to the Council and its activities.

Information on previous IASSA Secretariats can be found at the IASSA history page.